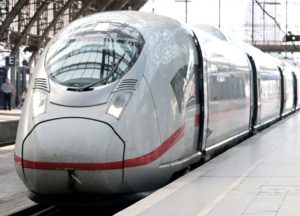 I admit that when I travel, I like to know what to expect. This is especially true for air travel, where a lot can go wrong anyway. When booking a flight including Airport Express Rail there were some drawbacks that are not obvious at first sight.

Lufthansa’s Air Rail Option offers some imponderables, especially when used for the first time. This starts with the fact that the train connection receives an LH number that resembles a flight. The travel documents also mention a flight, although it is a train connection.

However, the LH number cannot be found in the departure plan of the Bundesbahn. It is therefore almost impossible to check in advance whether a train is on time or not, as it is impossible to find out which ICE is used for this “Lufthansa flight”. Air Rail only means that certain compartments of a normal ICE are reserved for air passengers. With a little luck, a search with Google or Bing can spit out with which ICE the train journey is carried out.

Likewise, at the station you can only see on the platform which train it is. On the large board, where all departures are listed, an LH number cannot be found. However, both the transfer by train to the airport and the flight itself are checked in at the same time, so that at least the track was indicated. And it was only there that the first indications were found that you were at the right place. Only on this track (in Cologne main station track 6) you can find hints, where the train will stop and only there you could see on the scoreboard, at which ICE the Air Rail compartments were located.

When passengers leave the train in Frankfurt, there is a hall right at the transition to the airport where luggage can be checked in. This is quite practical because you don’t have to carry it through the entire airport. But there is a snag. It only applies to Lufthansa flights that are also operated by Lufthansa. If Lufthansa has commissioned an alternative airline for the flight, the airline is solely responsible for the baggage and it cannot be checked in at this point.

The USA is making a lot of publicity that entry has been simplified at some airports by automating passport control via terminals. There is a small snag: Hardly any passenger comes through this automated control, so that 99% of all passengers are sent to a counter after all. This in turn means that you can schedule a good hour to get through passport controls to get on U.S. ground (this only applies to non-U.S. citizens.).

After all, the introduction of the ESTA procedure has made things a lot easier. Now a questionnaire is no longer filled out in the aircraft, but online via a website. However, there are fees of about 15 Euro (depending on the exchange rate).

Of course I waited at the baggage carousel for my luggage. But it didn’t come. This alone took a while. Those who have built in little time buffer here will be left out in the cold. Because I was looking in vain for an employee of the airline, so that he could give me information, what could have happened with my luggage. The nice gentlemen from Fraport and Lufthansa unfortunately couldn’t help me. And there is no United counter for baggage tracing.

So I tried my luck at the Air Rail Terminal. But on the way there there is the next snag. At the beginning the terminal is still signposted, but at some point it ends and there is no further indication of a direction. Tip: Now go in the direction of the long distance train station. Once you have arrived at the long distance station, you will also get directions to the Air Rail Terminal.

Another tip: You should go to the restroom at the airport. The Air Rail Terminal is located in a Deutsche Bahn building and they don’t have restrooms like that. And I’m not talking about paying comparatively high fees for it, there are simply none.

At the baggage claim of the Air Rail Terminal, however, my piece of luggage could not be found either. So I turned to the employees there and claimed as a little white lie that the United employees had sent me directly to this place to collect my luggage. After a few phone calls, the Fraport employees found out that it was in the catacombs of the airport and somehow nobody knew where it belonged. Finally it was transported to the Air Rail Terminal where I could receive it.

Back at the station

However, at the station (this time the long-distance station at Frankfurt airport) there was the problem that I was only told the track. On the train schedules, where it is shown which wagon stops at which point of the platform, it was not shown where the Lufthansa compartments were located (in contrast to the Cologne main station).

Since the flight was delayed, I missed the train. After all, I was automatically transferred to another train where I could check in online. However, I could not be assigned a seat (i.e. Lufthansa overbooked its compartment and I was put on a waiting list) and the “boarding pass” displayed a wagon number that did not exist.

To make matters worse, once again all displays on the ICE had failed when it finally arrived (after all, only 10 minutes late). But all train passengers stood a bit helpless in front of the train and nobody really knew where to go. An obviously usual condition with the train, which did not happen to me for the first time, because also the railway coworkers do not know what do next.

Fortunately the ICE was not fully booked, so I chose some free place after the train left. When there’s more activity, it usually doesn’t work.

Basically, the idea that air travellers arriving at the airport by train can check in and pick up their luggage directly at the station is a good one. Unfortunately, the flow of information does not work and the traveller is not told what the procedure is like if the flight is not operated by Lufthansa, but by another airline. It is well known that the railways have such problems with ICE trains that you have to plan sufficient time buffers so that the trips can be carried out without stress.

In my case, I was at the airport three hours earlier on the outward journey and could use it, because the baggage check including the search for the right counter as well as the security check took about one hour. Also on my way back I had almost completely used up the time buffer of two hours at the airport in Frankfurt to get my luggage.